While attending an event at Universal Orlando recently, our group had a phenomenal time. The evening ended with a Mardi Gras parade and then a concert of a band we really enjoy. It was an absolute blast hanging out with good friends going on exciting rides! What a great day. 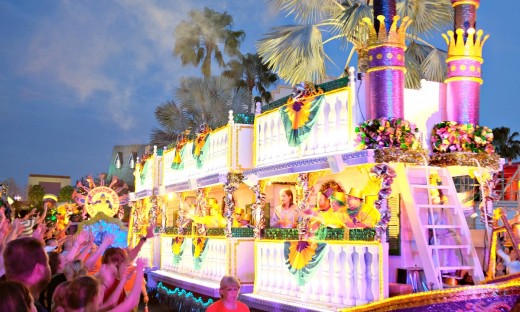 The Mardi Gras parade was fun, too, with plenty to see. We held our hands out so we could all catch bead necklaces, as you would expect.

But after the parade was over, while we were enjoying concert, I caught a lesson I wasn’t expecting.

My wife and I had many necklaces of beads. It was kinda fun to make eye contact with the thrower so they would throw them right at you. But then what? Wife and I were just standing there with a bunch of beads.

We were standing right near a fenced walkway, and I had the idea to give one necklace away. I picked an unsuspecting passerby, a little girl walking alongside her mother, and held my arm out over the fence with a necklace ready for them to grab.

While walking along, she looked at the necklace, looked at my smile, and took the beads — with a huge grin on her face! Once her mom realized what happened, she was smiling too.

No words exchanged; no time to exchange.

After that first test, I knew what to do with the rest of the beads. I plotted out my next beneficiaries and swooped in with a small gift for them. My favorite “victims” didn’t have any necklaces of their own.

Suddenly I realized it was WAY more fun giving beads away than it was to receive them all!

The obvious statement is that it’s more fun to give than to receive. But what’s not nearly as obvious is the lesson I learned….

You can only give if you have something to give.

Maybe that’s obvious to you, but to me it was a subtle yet important change in perspective. It made me wish I had gathered more beads during the Mardi Gras parade so I could have had even more fun giving them all away!

And it makes me wonder if I’ll later regret not gathering more things now, while I can. And it makes me more excited about keeping our lifestyle low and growing a business to increase income — so we’ll have plenty of blessings to give out later.

I can’t give away blessings until they are in my power to give. Now I have greater motivation to gather blessings, knowing it will be great fun to bless others later!