[A man in his twenties approaches a glass door. Just before it, he pauses, takes a deep breath, and opens the door. He stands, waiting in a simple room with chairs and a desk with a sign-in book and an empty candy wrapper in a glass bowl. He says “Hello?” toward an open door and a hallway. Roughly a minute later, a woman in the hallway nearly passes the room completely before seeing the man. She turns sharply and enters.] 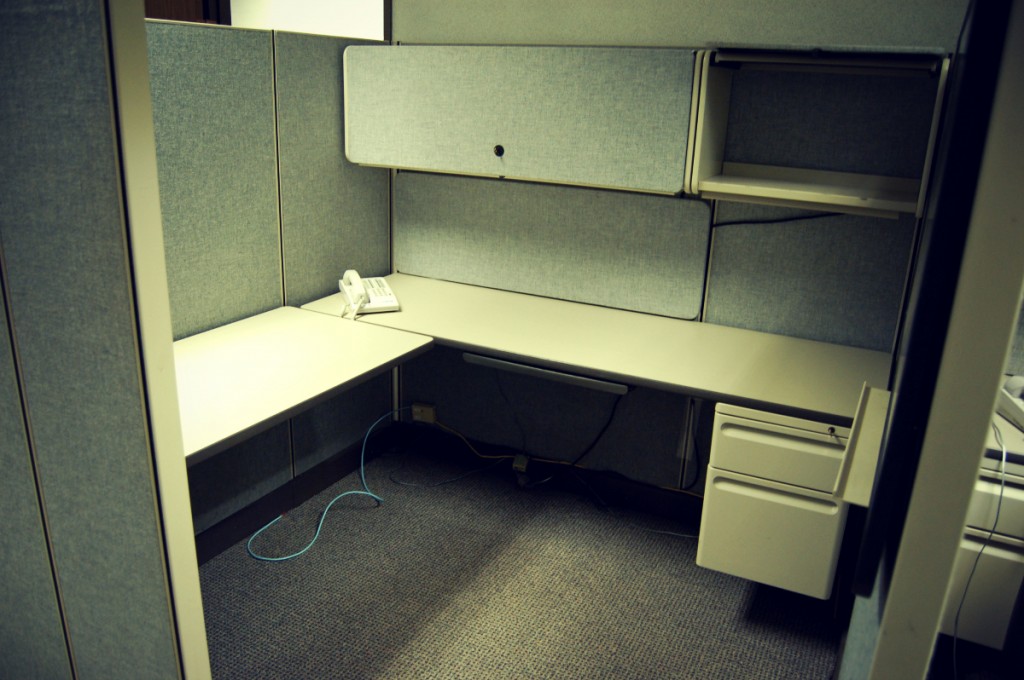 Secretary: “May I help you?”

New Hire: “Good morning, my name is David, and I’m here for my first day of work.”

Secretary: “Oh, is that today?! One moment — I need to go speak with — I’ll be right back.” [She shuffles hurriedly out of the room.]

[Muffled voices can be heard from the next room, quietly at first but growing in intensity and volume. David sweats nervously. A few phrases are understandable.] “When did we know…” and “…everything was supposed to be ready…” and “…dropped the ball!”

Albert: [A middle-aged man walks in the room abruptly.] “Who are you?”

Albert: “Right, from the interview. Do you go by Dave or David?”

Albert: “Follow me, Dave.” [He leads David across the hallway, into a large room filled with cubicles, and down an aisle to a cubicle near the center of the room. The secretary is close behind.] “Um, you will work here. Janet will get you a chair.”

David: “Thank you… May I ask what I should do for a computer?”

Janet: “We are out of new computers. Maybe he can use one of the old desktops.”

Albert: “No, those aren’t any good. I am sure we have…” [Voices fade slightly as Albert and Janet rush down the aisle of cubicles, talking sharply. David stands in a dusty cubicle, empty save a phone and several wires. He hears nearly every sound made in the large room through the thin cubicle walls. Vague muttering in a low voice comes from just over the wall opposite the entrance to the cubicle. The muttering stops. They come back shortly. Janet is carrying a large, older style desktop. Albert looks David in the eyes.] “You’ll use this computer. I’m not sure what’s on it, but it worked fine last time we used it… If you need to install any software, Janet will check over your changes before typing in the administrator password.”

[David nods silently. Albert walks away briskly. Janet moves a monitor from the cubicle across the row to his desk. She wheels in an office chair, then leaves. David stands with his hips facing the cubicle opening. He looks at his surroundings several times before he slowly begins setting up his workspace.]