It’s pretty easy to lead others astray, either intentionally or accidentally. Even if you have no idea people are following you. 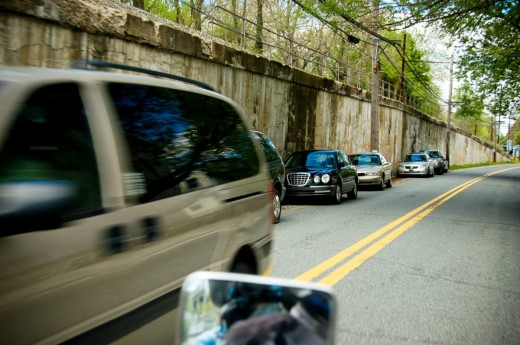 People are watching what you do all the time. When they are influenced by your actions, they are followers. Which makes you a leader.

Just yesterday, I saw a clear example of this in action.

I was in the middle lane of a busy road, ready to switch to the right lane after the intersection in order to catch my entrance ramp onto the highway. A Prius was in the right lane, with three small cars behind him. All four of the other cars, it turns out, were trying to get to the same ramp I was aiming for. We all started moving through the intersection as the light turned green.

But there was a problem.

The right lane was blocked off by large construction cones less than a hundred feet past the intersection.

I saw the Prius slow to a halt, then cautiously but deliberately squeeze through the gap in the big orange cones, going straight. He is now officially trapped in the blocked-off right lane. Thus, we have a simple story of a confused driver.

But that’s not all. He was attracting a crowd!

One by one, each of the three small cars behind the Prius slowed and drove through the gap between cones. Into the lane blocked off for construction.

Can you imagine what was going through each of their minds?

The Prius eventually realized he could not continue in that lane. Good thing, too — he would have driven straight into barricades if not! The Prius slowly merged back into the middle lane, dodging the cones once again.

And so the Prius made a harmless mistake. He was trying to turn right up ahead, and merely stayed in his lane.

Three other cars saw him going into the construction area, and joined the venture. It reminded me all too much of Lemmings — a computer game where creatures are continually walking forward until something forces them to turn back. If one falls off of a cliff, all of them will follow to an unfortunate death. The three cars all figured out they could not continue, and were forced to merge back into the middle lane. What a mess!

And thus, I was reminded that even our mistakes have an audience — an audience who will assume our actions are the best course. We all have followers watching our every move.

Mistakes lead others astray. Be vigilant and intentional with your actions!

Have you ever led others astray accidentally? Have you ever been led astray? How did it feel?
Category: Big Picture