I’ve been reading about “The Broken Windows Theory” recently and I’m fascinated with the concept. (Read the full article here.)

The theory explains that a broken window, if left unfixed for a period of time, symbolizes disorder and leads to more broken windows, triggering increased criminal activity. 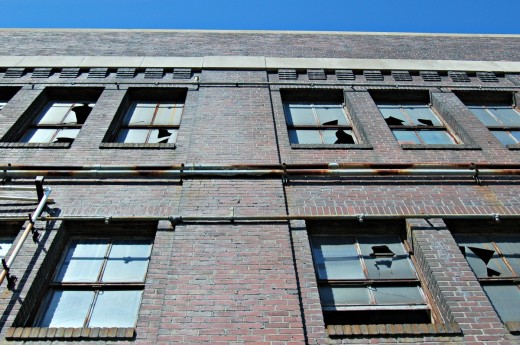 In the original 1982 article, the Broken Windows Theory was supported by the damage done to an intentionally-planted abandoned car in two completely different cultures. In the one neighborhood, theft and vandalism occurred within minutes of abandonment. Even in the “control group” neighborhood, once the person behind the test hit it with a sledgehammer, that vehicle was soon destroyed thoroughly.

Doesn’t it make you wonder how else this theory can be applied?

The theory implies one bit of chaos leads to another.

One ounce of chaos will breed significantly if left unchecked, just as one broken window leads to increased crime if left unfixed.

Wife and I have seen it displayed in subtle yet significant ways recently. Tell me if these seem a bit familiar:

Disturbing, isn’t it? The article hints at other ripple effects from broken windows: fear, disrespect for authority, and mob psychology. This reminds me that everything affects everything else, as The Butterfly Effect implies.

One solid defense against this decay is ownership. Proactivity. Seeing a problem and taking care of it, whether it is your job or not.

Ignoring problems is dangerous. Deal with chaos as soon as you see it brewing, or it may result in a storm which overshadows any sense of calm. Fix the broken windows as soon as possible to prevent mob psychology, rebellion, and disorder from setting in, even in your own mind.

How do “broken windows” influence your actions? How do you respond to them? No sitting on the fence this time — pick a side!
Category: Management